With all the literature and claims out there, it’s easy to get confused about the do’s and don’ts when it comes to air purification and ozone generation. In short, air purifiers work by mechanically capturing particulates (dirt, pollen, etc.) in their filters while ozone generators function by either disabling those particulates (at the molecular level) or effectively destroying harmful, organic material such as mold and fungi. Most importantly, an ozone generator is NOT recommended for everyday air purification needs… direct exposure to human lungs can cause irritation over time. Instead, they should be used for the following: ozone for cigarette smoke, stingy mold or just about any pesky odor that’s either hidden, hard-to-reach or just can’t be dealt with via traditional cleaning methods. Let’s dig a bit deeper on the most important differences between ozone units and air purifiers… 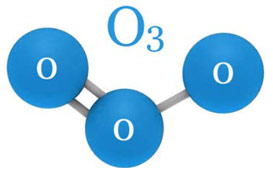 How They Clean the Air

Ozone Generators: As mentioned above, ozone (which is O3, basically oxygen with an extra oxygen atom) works by attaching an oxygen atom to chemicals, odors, mold, fungi, etc. That process is called oxidation and once attached, it changes the molecular composition of the pollutant, causing it to break down then ultimately harmlessly fall to the ground. In nature, ozone is naturally produced by an electrostatic process during rain or thunderstorms. That fresh and clean smell after a good storm is due to ozone (the word “ozone” is even derived from the Greek word for “smell”). Ozone machines efficiently replicate that process through either corona discharge or UV technology. Either way, the resultant ozone molecules are able to penetrate walls, carpet, fabric and more to fully and completely remediate even the nastiest and the most hidden pollutants.

Air Purifiers: Traditional air filters work in a more mechanical (physical) manner. Most units have two main components: a circulating fan and a series of filters. The fan is key in “feeding” as much as air as possible to the air purifier. The stronger the better as a greater volume of polluted air can pass through the filters per hour. Of course, the main downside is the noise. Most (poorly built) air filters have cheap fans that tend to be noisy at high speed settings. Modern models tend to use better and more efficient parts, dramatically reducing noise…which is critically important while trying to catch some ZZZs :). For example, we have the IQAir HealthPro in our home and, thanks to a blend of proprietary fan technology and sealed compartments, its motor is whisper quiet.

With respect to filters, most higher quality models have a series of progressively finer filter layers. First, is usually an activated carbon pre-filter which catches all the big stuff: dust, pollen, etc. It’s also critical in extending the life of the more expensive HEPA filters, which are next in the series. HEPA, which stands for High Efficiency Particulate Air, is a very fine filter mesh capable of capturing smaller particles such as finer dust and other chemical pollutants. They usually can’t capture bacteria, mold or viruses, as they’re just too small and tend to pass right thru. Some higher-end units attempt to fill that gap with the use of UV light during the air treatment cycle. Though the research is spotty on the effectiveness of UV during short bursts like that, there’s a good chance the UV helps kill the majority of microbes.

In our experience, ozone generators and air purifier units serve slightly different roles. Ozone should be used when you have a serious or untreatable smell or infestation (mold, fungi, etc.). And, remember, they should never be run with anyone inside. Once your shock treatment is done, open up all windows and let it aerate for a good half hour or so. Air purifiers are your prevention. Running 24/7, they’re a great way to prevent the need for ozone shock treatment (or at least increase the time between treatments). To maximize your air quality levels, we highly recommend you implement both. Sure, air purifiers are an ongoing electric and replacement filter cost, but you can’t put a dollar value on your health.